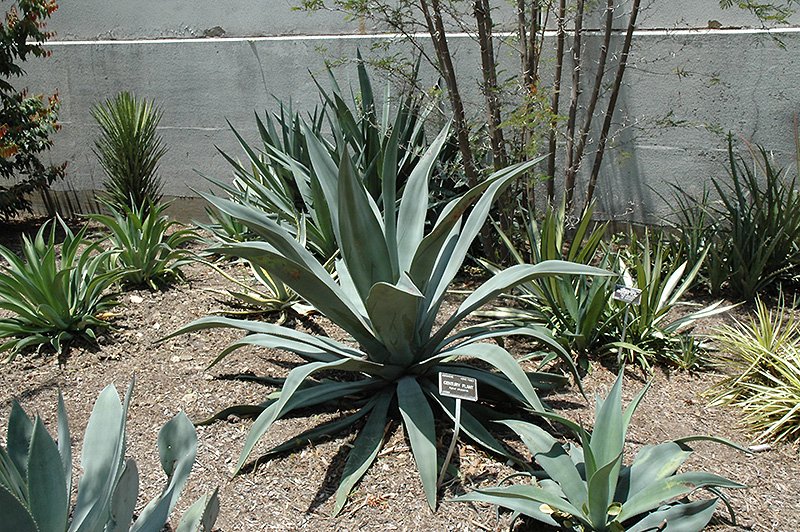 Golden Flowered Century Plant features bold spikes of yellow pincushion flowers rising above the foliage in mid summer. It has powder blue foliage with bluish-green stripes. The succulent sword-like leaves remain powder blue throughout the winter. The fruit is not ornamentally significant.

Golden Flowered Century Plant is a multi-stemmed evergreen shrub with a more or less rounded form. Its strikingly bold and coarse texture can be very effective in a balanced landscape composition.

This shrub will require occasional maintenance and upkeep, and usually looks its best without pruning, although it will tolerate pruning. Deer don't particularly care for this plant and will usually leave it alone in favor of tastier treats. Gardeners should be aware of the following characteristic(s) that may warrant special consideration;

Golden Flowered Century Plant will grow to be about 4 feet tall at maturity extending to 15 feet tall with the flowers, with a spread of 5 feet. It tends to fill out right to the ground and therefore doesn't necessarily require facer plants in front. It grows at a slow rate, and under ideal conditions can be expected to live for approximately 10 years.

This shrub should only be grown in full sunlight. It prefers dry to average moisture levels with very well-drained soil, and will often die in standing water. It is considered to be drought-tolerant, and thus makes an ideal choice for xeriscaping or the moisture-conserving landscape. It is not particular as to soil pH, but grows best in poor soils. It is highly tolerant of urban pollution and will even thrive in inner city environments. This species is native to parts of North America. It can be propagated by multiplication of the underground bulbs.